Stay tuned for more news concerning Warped Tour!  We are in Denver resting up for tomorrow’s concerts!  Scott was kind enough to drive after I got a bit misplaced.  He got us to the hotel, but we had almost three hours to kill before check in.  Scott (and Siri) managed to chauffeur us to Hot Topic at the Pavillion Mall…where I proceeded to spend way too much money.  In my defense, it was Bela’s first trip to that store, and there are so many cool things to buy!  Some of the T-shirts were on clearance, and the deal was buy one, get one for $1.  What else could I do?

After Hot Topic, Scott was able to navigate to Myxed Up Creations.  It was quite interesting, but I made no purchases there.  There were a lot of skull items on display.  After that, we hit Starbucks for some energy and motivation.  Our last stop before returning to La Quinta to check in was Hobby Lobby.

Examples of merchandise in Myxed Up Creations….

Chillaxing in the hotel….

I was getting ready to shower this morning after breakfast and noticed I had been so busy making sure Bela had her clothes that I had forgotten to pack my shirts. I couldn’t believe it. I went to the front desk after I griped for a few minutes. Oksana, an awesome receptionist, told me where to find the closest Target so I could buy a shirt. 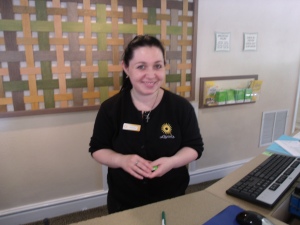 On my way out, I noticed some guys wearing light blue shirts that said ARGENTINA. I asked what was going on, and a nice young fellow said they are in town for the Lacrosse World Cup being hosted in Denver this year! I was hyper about it, but I went to Target anyway since the guys loaded up and left.

I found Target, got a cheap shirt ($8) and some Skittles for the concert. Thank the Lord that I found a service station with an attendant who checked my tire and put air in it. (She was super!) I put in gas, picked up a couple of packs of smokes and made my way back to La Quinta.

I settled in to just hang out and rest until we leave for the concert later this evening. I went out to smoke and noticed the Argentina guys were coming back. Turns out they just went to practice. Their first game is Friday. (I did look them up on Facebook.) I hope they win! Blogging comes in handy, and I use it to my advantage. I told one of the guys that “my girls” would like to get a picture of them. He saw no problem with it, so I hurried upstairs to send the girls with the best camera we have. By the time they made it downstairs, the guys were all in the room. Gen texted me to come down. I got there just as a couple of the guys were getting something out of the truck, so I asked them if they would let us get a picture of them. The guy asked if the girls would like to be in the picture with them, and I’m glad I was ready to grab the camera. Bela basically launched it at me! 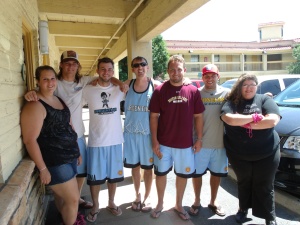 We left home this morning a bit before 6. By lunch, we were checking into the hotel. I had booked a room at La Quinta for two nights, but I decided to stay only tonight and roll home after the audition tomorrow. We were happy to get into our room, turn on the air and contemplate what was for dinner. After I booted up the ever-present computer, I ordered pizza from Dominos. While we waited, I checked my grad class homework, and made sure everything was caught up. Dinner arrived in about 30 minutes, but it took a lot less time than that to eat it!

After the pizza was gone, Bela went into a pizza-induced coma. 🙂 It didn’t last long. We spent a (very) few minutes outside, then back into the cool room. I had to have a smoke break.

The plan for tonight is to get a good night’s sleep, have breakfast and head to Magness Arena mid-morning. I won’t post tomorrow, but I will do my best to post Sunday.

The Foundation for Animal Care and Education