Every time I have seen a double rainbow, everything has worked out right.

Thanks for the picture!

I have reached the conclusion that language teachers are the most fun if you just want to hang out.

In my second job, I spend a lot of time at the local nursing home.  Yesterday I took time to ask a resident about her teaching career.  We ended up talking about kids then and now, and she told me a couple of stories about her students and her own children.  I enjoyed talking to her, but I still had some work to do.  I will go back soon; hopefully I can get some of her stories written down so they won’t be lost with the passing of time.  The stories of our elders are full of wisdom and humor.

I wish I had taken the time to write down stories from my grandparents before they were gone forever.  Nanny and Pawpie sure did a lot of living.  Grandma could have told some interesting stories as well.  Hindsight is 20/20, so please take my advice so you won’t make my mistake.  With the technology available today, you can have videos of your loved ones telling stories themselves.  Just imagine if I had been able to take videos of my grandparents.  My grandchildren and great-grandkids would have been able to not only see the people I loved and lost, but they would have been able to hear their voices!  What a gift!

For those of you with young children, I also say: Write things down!  (Laura and Keith, I am thinking of you when I give this advice!)  One day your memory will dim, and you will be confused as to which kid said what!  Trust me because I have already had it happen to me!  (I’m only 47, for crying out loud!)  In this day and age, there’s no reason not to document family gatherings, stories and memories of the people we love.

Lena could have told some great stories.

Are you looking forward to “eating your way through” the Christmas holiday? Do you have any favorite Christmas meals? What about special desserts? I know I sure have some favorites! When I was a kid, my mom made chocolate-covered cherries from scratch. I remember counting the days until they had been in the closet three weeks; that’s how long it took for the syrup to form on the inside. I focus on chocolate, so another great dessert is what Mom called Martha Washington balls. (Here in Nebraska they are called elephant balls. It makes for some interesting conversations!) Basically, peanut butter balls are dipped in melted chocolate. Simply amazing! Don’t even get me started on the homemade eclairs! I lurked in the kitchen hoping to snag the first one. Punchbowl cake is another favorite of ours. In case you’re wondering about the cake, I’ll post the recipe in the next few days. It’s decorative and tasty!

A main meal treat when I was a kid was Aunt Ottie’s cordon bleu chicken. It is labor intense, however. Mom fixed spiral-cut ham with a mustard glaze that is to die for! There are so many “foodie” memories….I don’t know about you, but baked macaroni and cheese has always been one of my favorite comfort foods; Mom always cooked her noodles, put them in a baking dish and poured in a mixture of milk, flour (to thicken it) and sugar. Chicken in Mom’s barbecue sauce is a winner, too. Sorry if this is making you hungry….

Once we moved to Mexico, our family traditions changed a bit. Mom wasn’t close enough to cook for us, so we had to make do. Ysabela and I loved the tres leches cake. For those of you who have never heard of it, that means three milk cake. It’s what some call a “wet cake.”

In Seye (a small village outside of Merida), the neighbor’s family gathered to make tamales. I’m so glad they invited us over! Tamales quickly became one of my favorite dishes ever. An unexpected treat was what they called “sandwichon.” That means a big sandwich. Bread was sliced lengthwise, the crusts were cut off and layers of ham, cheese and sauce were added. There are recipes online for those who really want to know. I looked one up today to share with my students.

I guess the point is that no matter where you live, there’s always something to anticipate for the holidays. Maybe it’s a quiet meal at home with family and comfort food; maybe it’s a house full of extended family, friends and movies. Some people I know simply enjoy the time off from work and make no plans at all. Whatever your way is, enjoy it to the max!

I see my younger daughter’s eyes glaze over as her daddy and I tell one more round of “remember that time in Mexico….” Used to be, she’d chime in with her own recuerdos. Now that she’s a teenager, her memories seem to be pushed back into the closet of her mind, stored like winter clothes no longer needed, but pulled out when the chill comes to the air once again. She is living in America after years in Mexico. I am still living in Mexico, at least in my dreams.

For as long as I can remember, my dream was to live in Mexico. There was never a solid reason why; it was just something I had in my heart and guarded until the right time. When I met my husband, things suddenly made sense. He took me to visit there, and I was in love—with him and Mexico. My mom jokingly told me I was dropped by gypsies, and that’s where my urge to travel came from.

My husband, mi media naranja, and I relive Mexico like it was yesterday, for it feels that way. We lived through hard times, no doubt, but we have made it—back on top after years of struggling and separation. And, yes, we do remember vividly all the battles we fought to be together and make a life that matters. As he says, “When the children are gone, what will we have? We have to build our lives, not around them, but as an example to them.” My hombre is a smart one.

I remember when I took our young daughter, Ysabela, to Mexico for the first time. We drove from Virginia to Merida, then on to Seye. To home. My father-in-law came with us to “protect” and smooth the way. I suspected he just wanted to go home and relive his old times with his friends. He did help, especially when we crossed the frontera. Everyone was crammed into a blue Suburban bought for four thousand dollars. We received many funny looks—a gringa with her hija, suegro, seven huge cats and a guard dog bigger than most had ever seen in the pueblos. Amigo was his name, and he was magnificent. Part chow, part German shepherd, he had a cinnamon Chow physique with the black muzzle of the shepherd. In his eyes, I could see an almost-human intelligence. Once we got to the village, he was my guardaespalda. Nobody dared come near me when he was close. One wrong move and I know he would have gone for the throat. Somehow, the malvados knew it too.

I was excited to see Mexico through Ysabela’s eyes. All she knew of Mexico was from our stories. The first day of our new life was full of wonder—for us, especially Ysabela—and for the gente in the village. Apparently we were the first gringas to be there in a long time. They were accustomed to the church missionaries visiting and leaving soon, but we were different. I moved the pets in and secured the house while I watched Bela out the living room window. I lost sight of her, so I went outside. She had been playing in the park across the narrow street. All I could see at first was a mosh pit of Mexican children. I finally caught sight of her in the very center of it all. Girls were touching her hair and looking at her like a doll on the shelf at Wal-Mart. Bela has always had the black hair and eyes of her daddy, but pale skin like me. The first few weeks were difficult for her, I know. You would have never known it just by watching her, though. Full of herself at just seven years old, she expected to be liked and accepted. Eventually she was. She learned Spanish the easy way—she was surrounded by it and consumed by the desire to make herself understood. In three months, the bad kids no longer could insult her and sit back and laugh. She could defend herself quite nicely—or not so nicely. While she learned the language and soaked up the culture, she would tell me some of the kids called her “inglesa.” I told her she’s americana. That’s different. Many of the children were simply curious; others were hostile and envious. In their eyes, Ysabela had it all. She brought toys with her, of course, and everyone wanted in the house to see and report to their mamas. There was much chisme about who we “really” were.

I just LOVE old quilts, especially the ones that have been passed down in my own family. These two bring back memories for me. I can remember clothes made from some of the fabrics. I’ll bet my mom can recall where every piece of fabric came from. 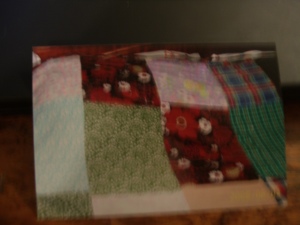 Several months ago, I came across some quilt squares my Nanny had painted over 10 years ago. My mom had sent them to me in one of her many care packages throughout the years. Both my grandparents, Nanny and Pawpie (otherwise known as Eva and Ed), died in 2000 within four months of each other. I remember watching Nanny work on these same quilt squares a long time before 2000. She taught me to quilt, but I can’t cut or sew straight. I still feel closer to Nanny when I try. Since I was not about to ruin my Nanny’s last project, it was time to call in the big guns.

After asking around town, I found the go-to person for putting quilts together—Judy R. Judy put the top together, and her out-of-state, long-arm quilting connection took this project to the next level. Her friend received my precious quilt and put the top, batting and back together. I refer to it as the quilt sandwich. After she quilted it, she sent it back to Judy who completed the project by adding the binding. The result is a stunning new quilt that I may never put on my bed! It’s simply too beautiful to expose to possible damage. This is a quilt that will be passed down for years.

Judy must have been proud of this quilt as well because she took it to show the quilters guild members in Valentine. I’m ready to show it off, too…..just maybe not on my bed!

This is the finished project! I could never have done this! 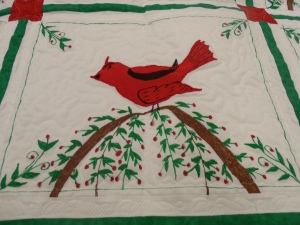 Can you see the quilting details?

Fun day at ruins near Tekax with Judith and Rosario…..fond memories! 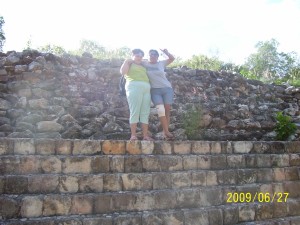