I attended several sessions at the ACTFL conference, and I learned quite a bit. The most stressful part was practicing Friday night for the presentation Carolina had put together. Basically all I had to do was explain my own assignments while they were on the screen. I didn’t really feel that prepared, though. My biggest fear was that I would somehow embarrass Carolina after all her hard work. (I was also feeling a bit guilty about snoring so much the night before and disturbing her beauty sleep.)

We ran through the presentation (quickly) at the hotel, but we still needed to add a bit more, so we decided we’d go in early the next morning to have one last practice session before 10. Alas, it was not to be. We hustled (due to a light rain) to the convention center, found our room…and discovered there were a few people already waiting for the session to begin! Practice was not possible at that point, so we just gave each other a look and hoped for the best. We paced and chatted until almost 10. Nick, another of Carolina’s tech class students, was there to support us. It was awesome to see a friendly face in the front row. He was also sweet enough to take some pictures for us. (Thank you, Nick!) 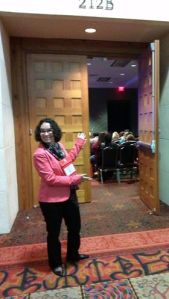 Carolina was ready to present.

In spite of talking to a full house (Carolina stopped counting at 60.), my nervousness disappeared once the Prezi started and I had to explain my work. Once I got into it, I was fine. I looked around the room and saw smiling faces; some people were even taking pictures of the screen as Carolina and I clicked through the Prezi! It was amazing. (Just to give you an idea, there were about 6000 teachers there. One lady commented that she counted 65 sessions offered in one time slot, so there were plenty of places for people to go.) 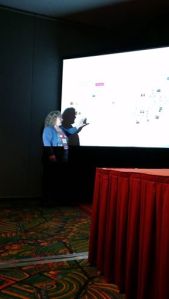 My nerves were under control.

When we were done, Nick spoke for a couple of minutes about what he learned in the Spanish Web 2.0 class with Carolina. He went from teaching Spanish to being an ESU technology person! Carolina concluded the session, and her business cards disappeared like candy at Halloween. I didn’t think I would need any, but what I had with me went fast as well. It was so nice to be able to chat with the attendees. One fellow named Martin said he came to the conference specifically for our session! The title was Analysis of “Cajas de carton” and “Senderos fronterizos” Using Web 2.0. Martin had been teaching those books for the last five years.

Carolina thought it all went quite well, and I agree. She even suggested that I submit a proposal of my own for next year’s conference. I’m not sure I’m ready for that, but I’m thinking about it.

Canine Behavior & Training, Board and Train, Daycare, and Seminars